Little fried pies are a thing in Texas. They can be found at sporting events, county fairs and even some food trucks. They are easy to make and can be filled with just about any pie filling.

Peaches were in season when I filmed the video so peach fried pies are on the menu. This recipe is an adaptation of a recipe by Lisa Fain in her book, The Homesick Texan. Lisa made them with apples and I made them with peaches.

Start by making the crust. Stir the salt and flour together and then blend in the lard using a pastry cutter. At this stage, it will never come together and look like dough. Instead, it will look like clumps of flour. When it gets to that stage, start adding the ice cold water a little at a time until it is moist enough to hold together. Kneed the dough by hand, form it into a ball, cover it with plastic wrap and refrigerate it for an hour. The dough must be cold to actually make the peach fried pies.

Peel, skin and pit the peaches. Oh sure, I suppose you could cut corners and buy a can of peach pie filling, but this wasn’t that hard. Buy extra peaches because there is a bit a waste as you remove the pits. Add all of the filling ingredients to a cast iron skillet and sauté until the peaches have softened, about 5 minutes. Remove it from the heat and let it cool. Do not try to make the peach fried pies with hot filling, it will just ruin the dough and make a big mess.

Remove the dough from the refrigerator and flatten it with a few good thumps from your fist. Then roll it out to a thickness of about 1/8″. Use a biscuit cutter to cut out circles 4 to 6″ in diameter. A 4″ pie is little. That is what I made in the video. I suggest 5″ or 6″.

Moisten the edge of each circle with a little bit of water. Brush it around the outer 1/2″ then place 1-2 teaspoons of filling to the center of each dough circle. Fold it in half, press down along the edge to seal, then press the tines of a fork down along the entire seal. It’s OK if a little filling leaks out. Just use a little less in the next pie.

Heat the oil in a cast iron skillet to 350˚F. Carefully drop each pie into the hot oil, just don’t crowd them. It’s better to do multiple batches than crowd them and have them stick together. Cook for 1 minute, turn them over and cook for another minute. Remove with a spider and drain on paper towels.

Dust them with powdered sugar and serve.

Try These Other Great Desserts

Watch how to Make Peach Fried Pies on YouTube 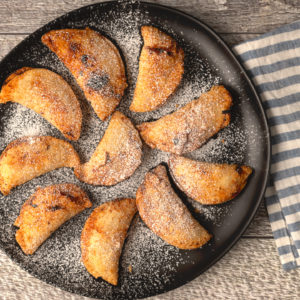 5 from 1 vote
Peach fried pies are bite-sized handheld little pies that are easy to make and kids love them. Give them a try! This recipe is an adaptation of a recipe by Lisa Fain in her book, The Homesick Texan. Lisa made them with apples and I made them with peaches.
Servings 6 Servings
Prep Time 30 mins
Cook Time 5 mins
Total Time 35 mins
Print Recipe Pin Recipe 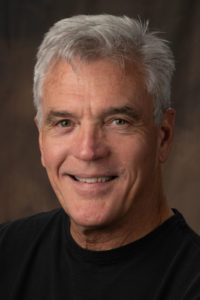